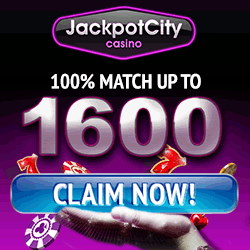 A cacophony of anxious voices fill the room as the video starts. At times it almost seems as though the gambler on screen has a relationship with Buffalo Gold Slots, asking for it to give him its colorful monetary pleasures as golden buffalo and coins run through his screen.

This is the story of a player, whose eccentric energy and pure love and excitement of the game takes you along his lucky journey. Colorful, brilliant images appear on screen before the viewer. In this slot, a buffalo, landscape image, and gold coin win you points, along with fun added extras like a 2x or 3x symbol, which means you win double the cash.

If the player is lucky enough, he will score a golden buffalo or a running buffalo, both which appear dramatically with a shiny gold rim around the photo of the buffalo. These buffalo must line up vertically, and as the film progresses, the viewer can feel the excitement quell within the player as his luck continues to increase at Buffalo Gold Slots.

As the video starts, the player is more relaxed as we hear him say “coins, coins, coins” or “golden buffalo please.” Around the 1 minute 16 second mark, the player wins his first 5 games free, and you can sense the anticipation building.

The video takes you through the players experience, as he chats excitedly with his friends about the prospect of winning more money, which slowly becomes more of a reality as we see golden buffalo, and coins appear more frequently.

At 2 minute 28 seconds, marks another one of the more exciting moments for this player as he starts to realize his luck with this game, and wins 5 more free! At this point we notice someone standing idle, perhaps a friend of the man who is equally as captivated by this man’s undeniable luck and joins in to watch.

The man’s excitement takes a dramatic turn at the 3 minute 48 second mark as the reality of his potential fate sets in. He is now continually winning, as golden buffalo and landscape images appear on his screen. He claps and yells! High fiveing the person next to him as he wins five more points and his score increases dramatically.

Over time his seemingly lucky finger presses the buttons of the machine with hope and wonder. At the 5 minute 20 second mark you hear the man comment that he has won $141.00 more dollars, stating it in a way that alludes to his impending win. Still however, anticipation increases, since gambling is simply a game of chance.

Around 10 minutes, the man reaches the climax of his playing experience at Buffalo Gold Slots, yelling in glee watching his final few golden buffalo line up. He continues to ask the machine in seeming desperation to deliver what he wants most. Just a few more coins! A few more golden buffalo! Now fully understanding what will win him the most points, he knows exactly what he needs to ask for for the lucky slot gods 🙂

In the final seconds of the game, the man shouts excitedly as golden buffalo line up, and his dreams of taking it all finally come to fruition! The man walked away with $1,000 in pocket, and a night of lucky wins behind him.