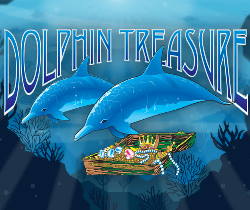 Those with the courage to dive deep into the underwater world and start gathering lost treasures can do so when they set in motion the 5 reels of the Aristocrat powered Dolphin Treasure games that come with 20 paylines. This is one of the most loved slot machines ever and it was first released in land casinos back in the year of 1996.

A real play money version of Dolphin Treasure is not available online, in fact Aristocrat games are normally not available at online casinos for real money wagering at the moment from what we know.

But the terrific news we have for you is that many free Aristocrat online pokies can be played on our site to enjoy on iPad, iPhone and Android, don’t forget apps are not needed on on our site.

An underwater landscape depicting some floating dolphins provides the background graphics to this slot machine. The reel section of this slot is entirely covered by a solid cream colour.

The icons that players get to come across as they spin the five reels of Dolphin Treasure slot game include the sunrise icon, a green turtle, an armadillo, a starfish, an octopus, gold fish, a treasure chest and some royal symbols.

What this means is that at the bottom of different water bodies are some precious treasures. For those daring enough to dive deep to the ocean floor, they may actually gather the lost possessions and keep them or even trade them for big bucks!

Games offering similar levels of excitement to Dolphin Treasure include 5 Dragons, Pompeii and Geisha, these are also Aristocrat powered pokies. Out of a 10 point rating, this game receives an 8.4 point rating in our how to play guide.