Online slots using the Infinity Reels system were first released in 2020, the first game in this popular series was El Dorado Infinity Reels. This is an exciting and innovative ways to win mechanic that has gained huge popularity in the casino industry. Its creator is an Australian based company called ReelPlay a company that works a lot with Relax Gaming.

Infinity Reels has been incorporated into quite a lot of games thus far as you can see above this text, we have all of them available on this site to play for free in the demo mode.

Infinity Reels How They Work

These pokies games may seem complicated at first look but they are just very simple in operation.

As the name of the game implies, you have an infinite number of game reels that could “possibly come into play”. Well we really don’t expect to have an eternal winning gaming session but it’s still as great dream to have.

The infinity name derives from the possibility of continuously adding more reels onto the right side of the game with each and every subsequent win. When the game spin is over and you have no more winning symbols on the rightmost reel, the reels will reset back to its default state of usually 3×3 or a 3×4 grid. 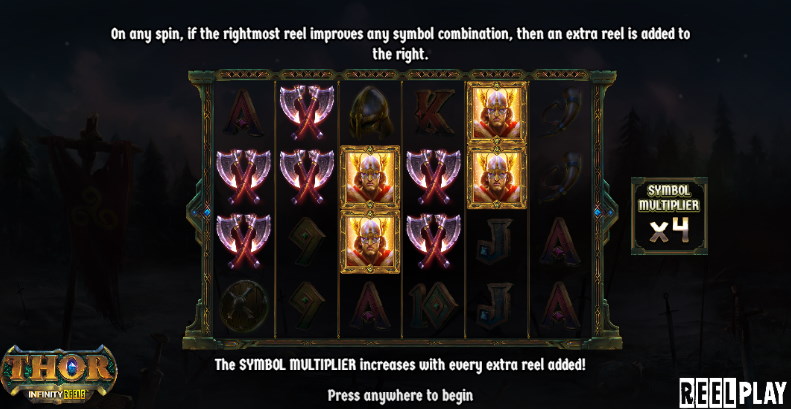 But it gets a little more exciting in the base game, when you get more reels added this also comes with an increasing multiplier win factor. This starts at x1 symbol multiplier and this increases by one symbol multiplier unit with every consecutive win and reel extension reaction.

Please note: By design these slots are usually highly volatile.

In our real money testing the greatest number of reels we have ever had in play has been 12 reels but the pays were quite good though due to the multiplier factor.

These games are set to be as popular as the Megaways slots we think, not only are they fun and rewarding in the base game play they also have heaps of bonus features and jackpot features incorporated into the games.